I have been using Windows 8 for some time now and for the most part I have adapted to the changes. There are a couple of things that are still a bit annoying. For example, logging off or restarting the computer is an effort that I’d rather avoid. Not too long ago I stumbled across a post on being able to add shortcuts to the Win + X context menu within Windows 8.

First of all, for those who don’t know, the Win + X context menu is a nice and easy way of getting to the most popular tools for Windows with the press of a couple of keys on the keyboard.

Secondly, it is pretty simple to add, remove or change these shortcuts. The Win + X shortcuts come from the C:\Users\<username>\AppData\Local\Microsoft\Windows\WinX. This means you can simply add shortcuts to the existing Group folders located there, or add another Group folder in the same format.

Lastly, if that is too complicated for you, there is an application available from WinAero that can help you add, remove and change the shortcuts available from the Win + X menu. For more information, you may find this blog post useful.

Now with this in mind, I have created a few PowerShell scripts so that I can Logoff, Restart, Shudown, plus more all with a couple of key presses! 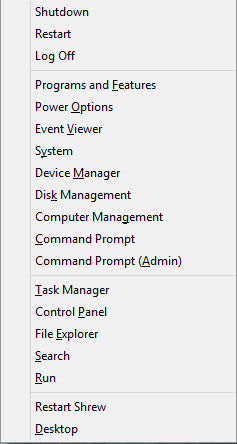 I thought I would share with you a productivity tool that I have stumbled across that I now use every day!

For quite some time now, I have been keeping lists of almost everything. For me, it works. A list of the next steps I need to take in a project, a list of tasks I need to work on, a list of requests for information etc. These lists used to be in several places and very disorganised. For example, I would have a book that would be my main To Do list at work, then if I had a meeting, I would take my Meeting book with me and most likely forget to translate the action points I needed to take from my Meeting Book to my To Do book and things would just get forgotten until my next Meeting when I would open up the book and realise I forgot about the tasks from my previous Meeting.

Then there is the stuff I need or want to do at home, some of that stuff would live in a Notebook on Evernote but most of it just lived in my head.

For me, being organised is important and even though my written notes had got me by, it was time to step it up a notch. I remembered from a few blogs that I read about productivity that there is a method called “Getting Things Done”. You may be familiar with it, for those who aren’t familiar with the work of David Allen on “Getting Things Done” you can read more here. This method is pretty similar to the method I was using anyway and so became the basis for my search for some form of online tool that I could use to manage the many lists of tasks I have. After searching for “Getting Things Done Task Manager”, I found Get it Done App. It basically is the first thing to appear the search.

Some of the features that stood out initially to me before signing up were:

Immediately I knew I had to give this a go!

Once logged in and using the app for a few days, it became apparent that I could definitely use this as my one stop shop for To Do Lists. Here are the reasons why:

Over all this is an absolutely awesome productivity tool that helps me feel much more organised than I could ever imagine and the best part is that it is with me whether I am on my computer at work, on the road with my laptop or tablet, or even just out and about with only my mobile phone! I would highly recommend this tool to anyone!